Hook+ is an Apple MFi approved switch interface that provides a reliable wired connection to the iPad and iPhone via the Lightning connector. Hook+ is compatible with Switch Control found in iOS 8 or later.

ABOUT HOOK+
Hook+ is an Apple MFi approved switch interface that provides a reliable wired connection to the iPad and iPhone via the Lightning connector. To get started, simply connect one to four switches to Hook+, turn Switch Control on, and connect Hook+ to your iPad or iPhone.

Hook+ utilises the Apple auto switch configurator and the first time Hook+ is used with an iPad or iPhone it will automatically configure the iPad or iPhone to use single switch auto scanning or dual switch step scanning based on how many switches are connected to Hook+. Once initially configured, switches can be manually re-configured to meet the needs of the user. The Apple auto switch configurator is only available on Apple MFi approved switch interfaces.

Once Hook+ is connected and Switch Control is configured, you can do almost anything on an iPad or iPhone with a switch. Read an eBook, write an email, browse the internet, play games, control your home, and much more! 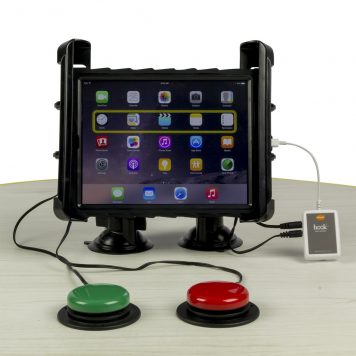