Apple proposed 13 new emojis to the Unicode Consortium in March in an attempt to expand their emoji’s representation of all people. They have presented emojis featuring accessibility-related instruments such as prosthetic limbs and hearing aids. As well as depicting people who suffer from deafness or troubled hearing, low vision or blindness along with disabilities like PTSD, anxiety and autism.

Unicode is a not-for-profit organisation that reviews emoji proposals.

Apple worked with the Cerebral Palsy Foundation, the National Association of the Deaf and the American Council of the Blind to develop these emojis that are being proposed to the Unicode Consortium.

With only one current disability emoji existing on IOS devices; the wheelchair symbol, it is clear to see why there is a need to introduce more inclusive emojis.

These are just some of the emojis which are being proposed by Apple : 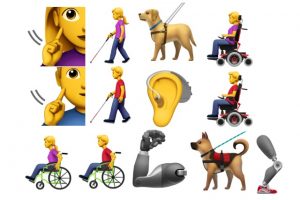 If these emojis are approved by Unicode, they will begin appearing in updates on Apple devices in the second-half of 2019.